Joyce’s Epiphanies and “An Encounter”

Reading next: The Art of Fielding, by Chad Harbach.

I’ve been reading Ellmann’s biography of Joyce slowly, a chapter at a time here and there between other things, as part of my preparation for a trip to Ireland later this year.  (I’m not sure whether the voluntarily exiled Joyce would scoff at or be proud of this fact.  Maybe a bit of both.)  It is as great as everyone says, full of meticulous detail, useful insight, and a great balance between attention to Joyce’s works and information on his life.  And yet, now that I’m reading Dubliners, all of his incredible work tracking down real-life counterparts for characters and scenes can seem so pale and inconsequential — the stories are just that great.

But the book has been immensely interesting, and I’m very glad to be reading it.  Ellmann convinced me to take a look at the “Epiphanies,” some of Joyce’s earliest fictional or pseudo-fictional works to survive.  These very short works — we would call them short shorts or flash fiction now — are well known by just about every 20th century reader of literature, even if they’ve never heard of them, due to their immense influence.  Joyce explains them in his early version of A Portrait of the Artist as a Young Man entitled Stephen Hero:

By an epiphany he meant a sudden spiritual manifestation, whether in the vulgarity of speech or of gesture or in a memorable phase of the mind itself.  He believed that it was for the man of letters to record these epiphanies with extreme care, seeing that they themselves are the most delicate and evanescent of moments.

Forty of Joyce’s epiphanies survive.  They don’t all live up to his own sublime definition, and they are most important as apprentice examples of a concept which would transform literature.  Many of them make their ways into his masterworks, put into minds and mouths of characters, allowed to bloom in their new environments, as we’ll see later.  The epiphanic structure of so much of modern literature is due largely to Joyce and the immense power of his use of the tactic in his fiction.  (I’m convinced, incidentally, that Joyce is the most influential figure of 20th century literature.  Beyond the impact of his works themselves, the arc of his career from lyrical poetry to short stories to autobiographical novel to monumental works of avant-garde literature has become the basic template by which authors are judged, everyone expected to produce something as crystalline as Dubliners and to move on from it to something as opaque and challenging as Finnegan’s Wake.)

Because this is Joyce, we’d do well to remember the multiple meanings of the chosen term for his invention (or “invention,” if you prefer).  Beyond its common meaning as a sudden flash of insight, Epiphany is the Christian celebration of Christ’s revelation as man (his “manifestation,” to use Joyce’s word), the celebration of the Magi’s visit to the manger or, especially in Eastern Christianity, of Christ’s baptism in the Jordan River.  Joyce was constantly putting his Catholic education and upbringing to use in understanding the world in the most unexpected ways; here, he embues the Christian and emotional meanings of the word with new, Freudian significance.  An epiphany becomes a revelation of the true self to the world, or a revelation of the deeper self to the self.

One of the epiphanies (number 38 in the sequence as I read them, edited by A. Walton Litz, in Joyce’s Poems and Shorter Writings) appears, transformed, in “An Encounter,” perhaps the most controversial of the stories in Dubliners, central to its place in publishing purgatory for a decade.  Two boys skip school to see the sights and take a trip to the “Pigeon House” on the waterfront.  As the day wanders on they rest on a bank above the Dodder River and are met by a mysterious man. 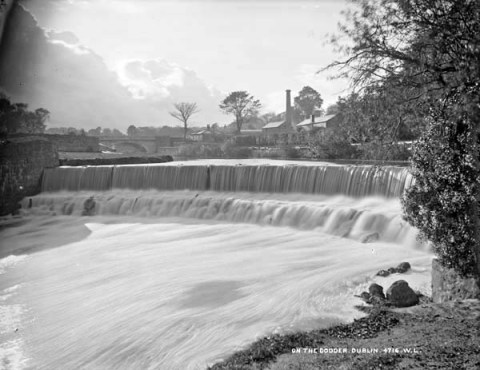 The 38th epiphany concerns a “Little Male Child” being asked about his “sweetheart” by two “Young Ladies” at a “garden gate.”  In “An Encounter,” this exchange is between the two truants, Mahony and the narrator, and this mystery man:

Then he asked us which of us had the most sweethearts.  Mahony mentioned lightly that he had three totties.  The man asked how many had I.  I answered that I had none.  He did not believe me and said he was sure I must have one.  I was silent.

-Tell us, said Mahony pertly to the man, how many have you yourself?

The man smiled as before and said that when he was our age he had lots of sweethearts.

-Every boy, he said, has a little sweetheart.

From there, things get very creepy indeed, the man revealing his interest in flagellation of young boys.  The complicated system of symbols and allusions in the story leads me to see a number of “sudden spiritual manifestations” in the encounter.  One is a possible reading of the incident as an allusion to the temptation of Christ by Satan in the wilderness: the narrator, an innocent away from his Christian school for the day, visited by a man with a sexual interest in pain and suffering, an interest in seeing the innocent defiled.  The narrator’s sudden realization that the man has green eyes — trickster’s eyes, the color of the eyes of Ulysses in medieval tradition — may have significance here.

I think this allusion is there, intended by Joyce, but more powerful is a reading of the man as a kind of epiphany himself.  Once the man begins on the subject of “sweethearts,” the narrator says, “He gave me the impression that he was repeating something which he had learned by heart or that, magnetized by some words of his own speech, his mind was slowly circling round and round in the same orbit,” and he begins to focus on boys, girls, and flagellation.  This is about as vulgar as an epiphany can get, this manifestation of obsessive, unhealthy sexual desire.

But the encounter here functions as a more mental, spiritual revelation, to the author (whom we can understand as Joyce or “Joyce”) and his audience, of the twisted side of Christianity.  “An Encounter” could be the encounter with Catholicism as obsession with the torture of an innocent child of God.

You are currently browsing entries tagged with epiphanies at The Ambiguities.