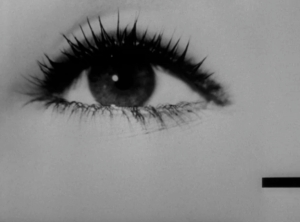 See also the three preceding posts in this series on the five female-protagonist episodes of The Twilight Zone season one.

“Mirror Image” (available online, at least for now, on YouTube) is the episode that Serling felt compelled to introduce the week before as a fine example of his ability to write meaty roles for women.  Its star is Vera Miles, its director John Brahm; both have interesting backgrounds that blend to make this episode what it is.

Vera Miles starred as Lila Crane in Psycho, released a few months after this episode aired in February 1960.  She had caught Hitchcock’s eye in the mid-’50s. The role that Kim Novak would make famous in Vertigo had been meant for Miles; but she was pregnant, and would wait a couple more years until she had her own chance at a doppelganger tale.  She had a lovely, plain, open face, a kind of Everywoman quality, that makes her very effective in this episode.

FYI, this is Evil Millicent.

John Brahm was a theatrical actor and director in Weimar Germany who fled to the U.S. with the rise of Hitler.  There’s something very much like a stage play about this episode, and something of an Expressionist influence, as well.  I love, for instance, the very simple set of the bus station, which is bracketed like the set for a modernist morality play by twin neon signs, bold, declarative, and emblematic of the content of the episode: 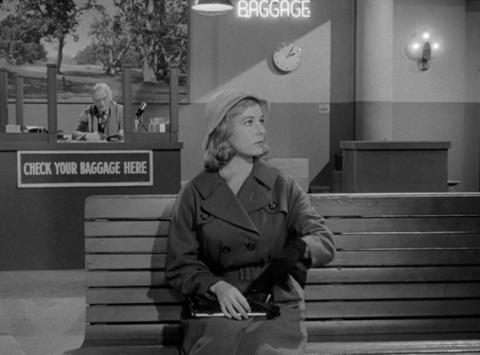 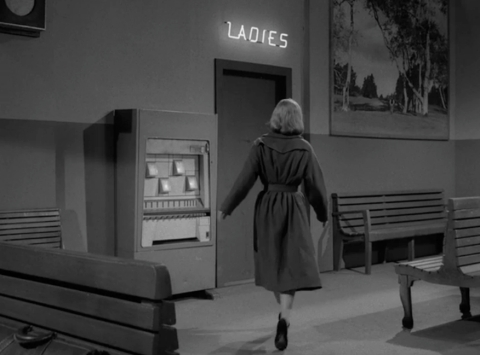 Yes: a lady, or ladies, with baggage.  This would be a fine title for the next episode of the five, “Nightmare As a Child,” as well.

“Mirror Image” is a fine example of a TZ episode that takes a fairly simple premise — woman fears she’s been replaced by her evil doppelganger — and makes it memorable thanks to visual style, good writing, and a slow build of tension that keeps the viewer interested.  The visual reveal of the doppelganger is especially effective.

As in “The Hitch-Hiker,” doom arrives in the mirror.  More interestingly, there’s a gorgeous frame-within-frame composition here that calls back to “The Sixteen-Millimeter Shrine.”  That earlier film also featured a woman looking at an image of her own self — with a very similar gesture, actually, though the roles are reversed: here the “real” self (in the process of being made fictive) is the horrified one, where earlier it was the “fictive” self (whose place would be taken by the real self by episode’s end).  The sign above the doppelganger makes explicit a theme throughout these episodes: the baggage that these women carry is, at least in part, the image of the self, which threatens to overwhelm and usurp the life of the person, the individual.

This is also another episode about a single woman, Millicent Barnes, traveling on her own, and as in “The Hitch-Hiker,” one can see a not-so-subtle subtext that such independence leads only to trouble, or to madness. “Offhand, mister,” says the washroom attendant to her supposed knight-in-shining-armor, Paul, “I’d say she needed some looking after… if you know what I mean.”  She means psychological help, or institutionalization, but she could mean so many other things, as well.

But as in “The Hitch-Hiker,” the tone and structure of the episode at least partly undercut that idea.  Oddly, both of the episodes are split in two between light and dark halves.  After Millicent sees her doppelganger on the bus and faints, the station manager turns off the lights.  When Millicent recovers, she heads for the ladies’ room again, hoping against hope to catch her double again: in the mirror, in a stall, somewhere.  She’s connected the neon “Ladies” sign with the idea of multiples of herself, just as we viewers have. 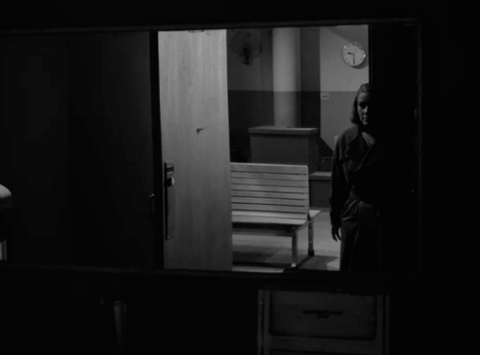 The ladies’ room, especially in its darkened state, seems a realm of the Freudian unconscious, a place from which bizarre symbol has irrupted into reality.  And so Millicent is carted off by the police to the nut house.

But in the reality of “Mirror Image,” Millicent was right, not insane, and the same thing happens to Paul — his double flees to take over his life, leaving him in the dust, a truly wonderful smirk on his face.  The shadows and rain-slicked streets of this sequence are beautiful, and obviously artificial, in the mode of expressionist cinema.  And as in much expressionist cinema, the episode can be seen as a societal indictment as much as a comforting horror that reinforces norms.

§ 2 Responses to The Twilight Zone‘s Women in Trouble: “Mirror Image”

You are currently reading The Twilight Zone‘s Women in Trouble: “Mirror Image” at The Ambiguities.