Women in Trouble: The Twilight Zone, Season One

On February 19, 1960, at the end of the twentieth episode (“Elegy”) of a new series entitled The Twilight Zone, Rod Serling, the mind behind the series, unexpectedly came onto the screen and delivered the following message:

[First clause cut off in surviving footage, likely “I want to”]… settle an argument to the effect that I’m not at my best when writing scripts for women.  Miss Vera Miles takes my side, in a most unusual and unique story we call “Mirror Image.”  I hope to see you next week: you in your living room, and Miss Vera Miles and the rest of us in the Twilight Zone. 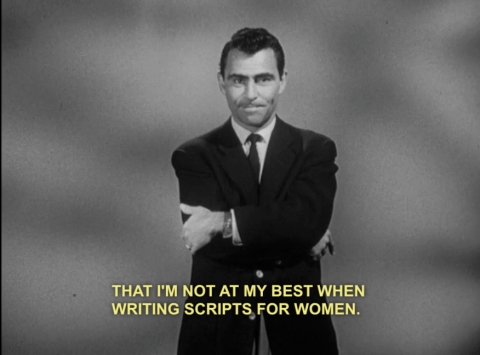 I’ve been watching the Twilight Zone in chronological order via Netflix’s streaming service; on-screen appearances by Serling were not yet a normal part of the series, so this made me sit up and take notice.  It made me notice, too, that only two of the first twenty episodes had focused on female protagonists.  I would agree that these were not the best-written episodes, but I had appreciated the conceits of both episodes, and they were among my favorite episodes visually.

As it happened, the weak ratio of female star turns in the first season only slightly improved — five of 36 (36!) episodes — but these five clearly mattered a great deal to Serling, and I’d love to research the backstory of his reasons for the on-screen proclamation.  The five episodes hang together in fascinating ways, and form (consciously?) a suite of stories about women in American life on the cusp of second-wave feminism.

In some ways, the focus in the series on male protagonists and, often, exclusively male narratives was in keeping with the 1950s television (and broader cultural) emphasis on the heroic male in westerns, science fiction, and other genres with pulp roots.  The female episodes of The Twilight Zone must have stood out for contemporary viewers from such offerings, especially as all five are focused not on domesticity or even married women, but women working, traveling, making their own decisions (for better or, more often, worse).

I’ll explore each of these five episodes in a series of posts.  I’m especially interested in a really interesting subtext in these five, and in series as a whole: women as subjects as well as televised objects, women looking back at the male gaze.  This would be nicely summarized in the very first image of the opening sequence used for the last few episodes of the season: 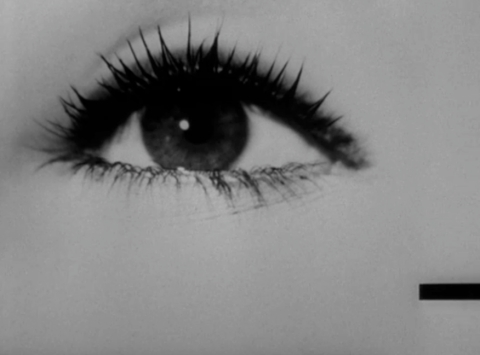 § 5 Responses to Women in Trouble: The Twilight Zone, Season One

You are currently reading Women in Trouble: The Twilight Zone, Season One at The Ambiguities.